98 Degrees' Jeff Timmons Dishes That Men of the Strip Is Like Magic Mike Mixed With Sex & the City! 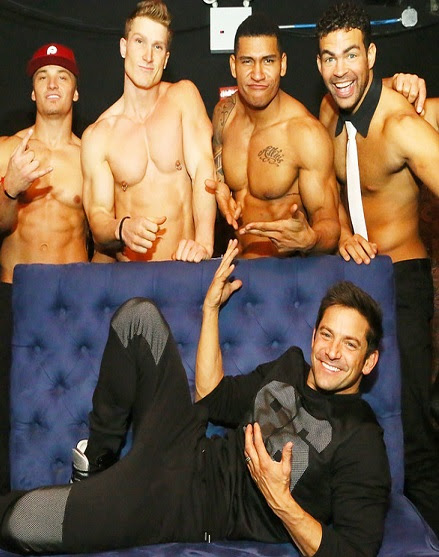 E! turns the cameras on the "Men of the Strip," a new Las Vegas male revue featuring 98 Degrees star Jeff Timmons.
Debuting June 1, Timmons teams up with entrepreneur "Money" Mike Foland and choreographer Glenn Douglas Packard to prep a group of hard-bodied studs for their big Sin City debut.
"These guys have very interesting lives behind the scenes. With this reality TV movie, you get a sneak peek at what these guys are like off the stage," he explained. "Some of these guys are actually shy. They aspire to do different things, including professional sports and acting. It's not all about bumpin' and grindin' -- it has a lot of depth to it."
With nicknames like "Poster Boy" and "Hearthbreaker," there's something for everyone! "When we were in 98 Degrees, each of the guys had their own fan base, so that's what we had in mind with these guys," Jeff said.
Timmons, who describes himself as a "married guy with all kinds of kids," says his wife actually pushed him to do Men on the Strip. "My wife actually encouraged me to do this," he admitted. "She said, 'This could be something really cool for you to create and be a part of.' My kids have seen the show! It's nothing over-the-top and not tasteful for them to see. If it is, they'll turn around!"