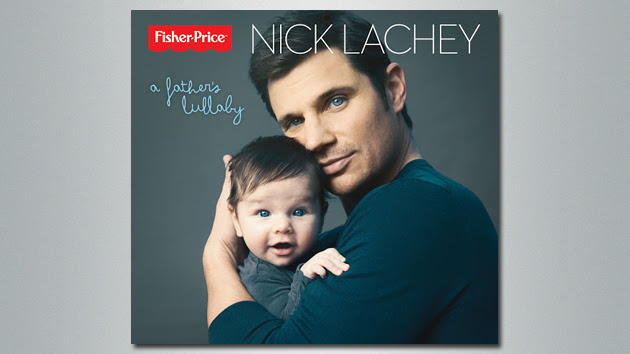 PRNewsFoto/Fisher-PriceMany a female singer has recorded lullabies after becoming a mom, but 98 Degrees' Nick Lachey is one of the few male artists who's done it.  In fact, he recorded a whole album of lullabies inspired by the birth last September of Camden, his son with wife Vanessa Minnillo Lachey.
"I was inspired when Camden was born to do something for him, a project for him," Nick tells ABC News Radio. "So I did a lullaby record, a combination of old classics and originals that I wrote as well. It's called A Father's Lullaby."  The disc is now available on iTunes, Amazon and the usual stores.
In addition to standards like "When You Wish Upon a Star" and "You Are My Sunshine," Nick also included a song specifically written for Camden...a song the toddler actually heard before he was born.
"You know, we were reading all these books, they said if you sing or hum to them in the womb, they'll recognize that song. So I wrote a melody, I didn't have the words yet for it, but I used to hum it to him before he was born," Nick explains. "And after he was born I wrote lyrics to it. Now it's what I sing him to sleep with. It's his little song...I don't know if he recognizes it or not, but at least I like to tell myself he does!"
Nick is happy to be able to share his fatherhood experience with his brother and bandmate,Drew Lachey, who already has two children. "There was never any doubt he was going to be a great father," Drew tells ABC News Radio. "Camden is such a great kid. They're both amazing parents and they're doing a great job. I'm glad [Nick] finally joined the fatherhood team, so now our kids can grow up together, and not be too far apart in age, and all that good stuff. "
"Drew set the bar high," Nick acknowledges. "Give him his props. He set the bar high."
Drew and Nick are currently out on the road on The Package Tour, which teams them withBoyz II Men and New Kids on the Block.  It should be quite a Father's Day this year: between them, the 12 guys in all three groups have nearly 30 kids!