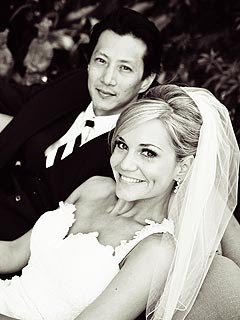 When Torque actor Will Yun Lee married actress Jennifer Birmingham, he enlisted the help of a few celebrity friends to mark the occasion.

With bridesmaids Vanessa Minnillo, Kate Beckinsale and The Price is Right's Rachel Reynolds on one side of the aisle, and groomsmen Joe Hahn from Linkin Park, Ryan Martin from APA and director Len Wiseman on the other, the couple exchanged vows in front of 200 guests in Shreveport, La.

"The best moment of our wedding was having everyone we love in one place at the same time, sharing our day with us," Lee tells PEOPLE.

The bride wore a custom gown by Carlyn Calloway and carried a bouquet of white roses as she walked down a lantern-lit aisle.

At the reception, Nick Lachey took to the stage and serenaded the newlyweds with a few songs. His performance included the couple's first dance to Eric Clapton's "Wonderful Tonight" and Stevie Wonder's classic "Signed, Sealed, Delivered, I'm Yours."

"Nick sang one of our all time favorite songs, 'Wonderful Tonight,' " says Lee. "But he changed up some of the lyrics to make it really personal. It was amazing." 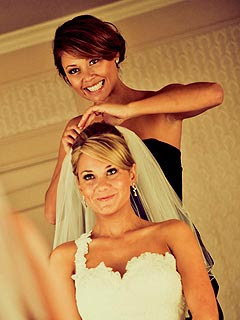 The happy couple, who have been together for 4½ years, were sent off with hundreds of sparklers and candles before leaving their reception in a 1950s Chevrolet convertible.

"We love being married," says Lee. "And now [Jennifer] can legally boss me around."

Birmingham currently plays Alison on The Young and the Restless. Lee, who co-starred on NBC's TV series Bionic Woman, will next be seen in the action feature Red Dawn.