98 Degrees Look Back on Style Regrets, 'Best Memories' of Their Career as Debut Album Turns 20

Nick Lachey has a message for his younger self.
"I would have told myself 20 years ago, 'Change your hairstyle,'" the singer, now 43, tells ET. "Don't go with the 'butt cut.'"
Saturday, July 29 marks the 20th anniversary of 98 Degrees' debut, self-titled album and the release of their first single, "Invisible Man." In honor of the milestone, ET asked the band about their memories from that day and the wisdom they've gained since.
"It seems like yesterday, really," Jeff Timmons, 44, says. "In that particular time, I think we were driving ourselves around in a Winnebago that was wrapped with our pictures on it and we were out there hustling and doing grass roots promotion ... But the excitement of the whole thing, this germinated from a dream that we had together and all of a sudden we're out there, the album's in stores and we're actually going into stores ourselves and buying our own records -- all that kind of fun stuff back in the day."
"He's still paying off that credit card," Justin Jeffre, 44, quips.
"We would literally pull into a town, like, driving ourselves in a motorhome, and call a radio station and request our own song as many times as we possibly could," Nick jokes. "In those days, you're just doing anything and everything you can to get yourselves recognized."
The work paid off -- but looking back now, Drew Lachey, 40, wishes they had also played a little harder back in the day.
"Don't take it so seriously," he offers the band's younger selves. "Enjoy it more, have more fun with it."
"It's funny because we tell these stories about 20 years ago and as I'm sitting here talking about it, those were some of the best memories of the whole ride for me," Nick adds. "Those early days where it's just kinda us against the world and, you know, we're driving ourselves and pulling into a town and then doing our own show. To Drew's point, I don't know that we necessarily appreciated it as much in the moment 'cause we were so tired and so nervous about what was gonna happen."
But mostly, it all comes back to those epic '90s fashion moments.
"Fire all these stylists and get someone else," Justin jokes.
"Maybe [wear] some smaller pants," Jeff adds. "We had these gigantic pants." 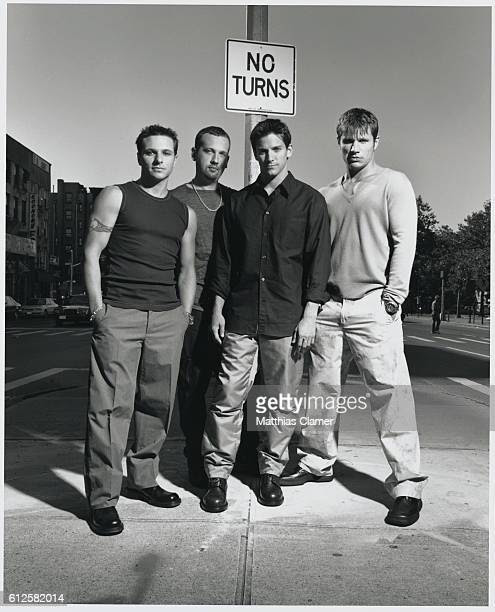