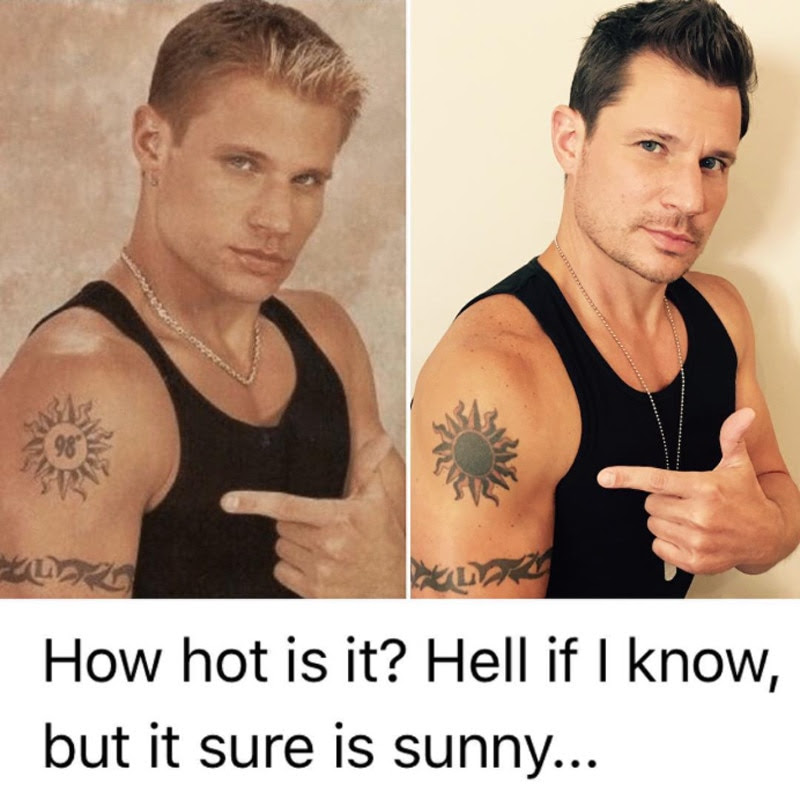 Nick Lachey is no longer predicting a forecast of 98-degrees.
The 43-year-old star took to Instagram today to share a hilarious throwback from his boy band days alongside a more current image of him recreating the pose. But there's one stark difference—turns out covering up his 98 Degrees tattoo wasn't the hardest thing.
The original ink featured a black and white sun with "98˚" printed in the center, while his updated tat blocked out the band name by filling in the sun's center. Captioning the post, "Today's forecast," the text on the singer's meme read, "How hot is it? Hell if I know but it sure is sunny…"


Nick may be saying goodbye to his boy band (or weatherman?) days, but every day is still 98 degrees in our hearts.

Despite the change in body art, the father of three looks incredibly similar to his former pop star self, recreating the unmistakably late 90s-early 00s look to a T—fitted tank top, chain necklace and that textbook teen idol smolder (though we wish he would bring back the frosted tips as well).

While his 98 Degrees days are long gone, the star has been busy raising his three children with his wife Vanessa Lachey, the youngest of which was born just last December.

"You have three, and then you realize: we're truly outnumbered now," Nick joked to E! Newsback in May. "It's such a blast to be at home with them and see the way they interact with each other.

Though he's left teen stardom behind, it looks like Nick Lachey is happy trading it for fatherhood!