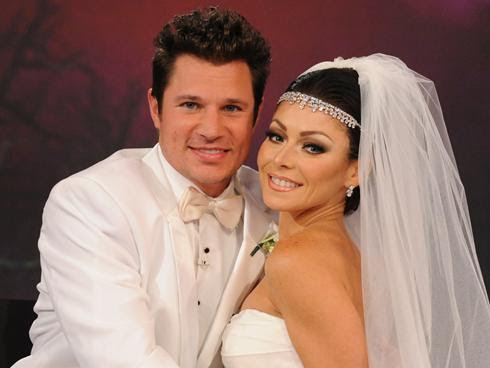 Nick Lachey really wants to land the job of Kelly Ripa's permanent co-host.
On this morning's Live With Kelly, Lachey, who has filled in several times including during last year's big Halloween show when he played Kris Humphries to her Kim Kardashian, burst into song to "express" himself.
He said he wanted to give Ripa "something to think about while you're on that journey to find your co-host."
(The show doesn't appear to be any closer to finding a Regis Philbin replacement, since co-hosts through May 25 were announced yesterday.)
To Barry Manilow's Mandy, Lachey sang:
"I remember all my life, I dreamed of hosting here on Live!
I'd lie awake at night, and stare at the ceiling/And looking in your eyes, keep fighting this feeling
Oh Kelly, all the co-hosts that you have been dating/Just send them away
Oh Kelly, there's just one you know should be in/It's me, Nick Lachey... "
Said Ripa when it was over: "Get the contract, for God's sake!"
Lachey added, he'd "sign it tomorrow."