SheKnows caught up with recording artist and TV personality Nick Lachey to chat about his work with the Big Brothers Big Sisters organization, his new solo album, his plans for the holidays and the possibility of kids with wife Vanessa Minnillo. 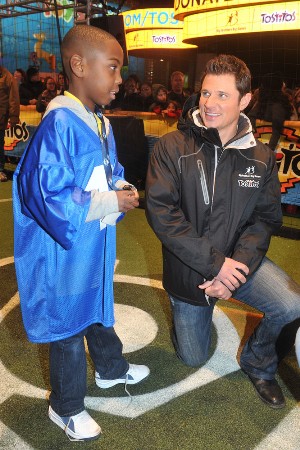 Television personality and multi-platinum recording artist Nick Lachey recently joined Tostitos to kick off the college football bowl game season in New York's Times Square. The Sing-Offhost was joined by former college and professional football greats for the "Party with a Purpose" event which benefited Big Brothers Big Sisters; an organization very special to Lachey. For the past eight years, he has been a "Big Brother" in Los Angeles and has had the same "little" who is now 15 years old.
We caught up with Lachey to talk about his brand-new album, the possibility of kids with wifeVanessa Minnillo and how he first got involved with the Big Brothers Big Sisters organization.
How excited were you to be a part of the "Party with a Purpose" event?
The Fiesta in the Square sponsored by Tostitos is benefiting Big Brothers Big Sisters of America, which is an organization that I've been a part of for about eight years now. I've been a Big Brother so it's something I really believe in and have seen firsthand how impactful it can be in shaping the lives of young people. So I was very excited when they called me and asked me to be a part of it.
How did you first get involved with the Big Brothers Big Sisters organization?
They'd asked me to be the spokesperson for their centennial event about eight years ago and I said that I'd love to but that I wanted to learn more about the organization and so that's when I started to get involved and became a Big Brother and have been a Big Brother ever since.
For people not familiar with Big Brothers Big Sisters, can you explain what the organization strives to do for young people across the country?
Well, what it does is it pairs an adult with a young person who may be in need of some extra mentoring and guidance. In my case, my little brother's father had passed away when he was a baby and he didn't really have a male role model in his life, so his mom signed him up for the program. It's basically about being a big brother, being a friend, being a support-system, showing these young people that someone really genuinely cares for them, is there for them and kind of being a guiding force for them. I've seen firsthand how impactful it can be and how fantastic the results can be and as a Big I can also say it's probably the most gratifying thing that I've ever done in my life. I often joke that I get more out of it than my Little does and I think that's probably true.
Is it true you're working on a new solo album?
Yeah, I'm working on it right now, I'm going to finish it up the beginning of next year hopefully by the end of February and it will come out in summer. It's called, The Soundtrack of My Life. It's a concept album, it's taking songs from movies that were meaningful to me and meaningful as I grew up and covering songs from those movies so I'm pretty excited about finishing that up and getting it out there. 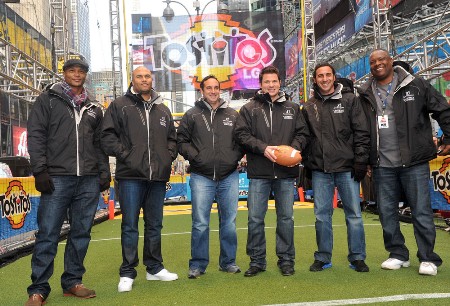 Are you and Vanessa Minnillo planning on having children anytime soon?
I think we both definitely want a family and I don't think there's any timetable necessarily for that. We're just enjoying being newlyweds and certainly that will come when the time's right; it's definitely something we look forward to at some point.
The Sing-Off has become a very popular singing competition on TV. Will you return next year as the host?
I certainly hope so -- it's been a lot of fun to be a part of that and to watch that show grow. A lot of days it doesn't even feel like work. It's just so much fun to be around all these talented people and to share that experience with them, so we certainly hope it comes back next year. And if so, I hope I get a chance to host it again.
What are your plans during the holidays?
For us it's really just about being with family so we're going to be in Cincinnati where my family is and hang out with the niece and nephew; watch them open some gifts and just enjoy family time.