Stepping out to support a cause dear to his heart, Nick Lachey attended VH1's Save the Music Family Day in New York City on Saturday (March 22).
The former boy bander posed for pics in a gray shirt, black leather jacket, and dark jeans along with fellow recording artist, JoJo.
In addition to his singing and playing husband and father, the 40-year-old star is also host of VH1's "Big Morning Buzz."
While making an appearance on the show on Thursday, Kristin Cavallari joked about the two having given their sons the same name (Camden).
Enjoy the pictures of Nick Lachey at Save the Music Family Day in New York City (March 22).

Jeff Timmons, a founding member of the band 98 Degrees, credits a low-carb diet and rigorous four-day-a-week workouts for his rippling physique.
"As I get older, I find it more difficult to stay in shape," Timmons told People Feb. 24. "It's mostly about diet. I watch what I eat: low carb, not a lot of grains. No sugar, except for booze once in a while. I eat lean meat, eggs, fish. I like sweets, so I can't eat any of them."
While Jeff, 40, has always been in great shape, he amped up his fitness regimen to prepare for his own reality TV show, "Men of the Strip," which debuts on E! this summer.
The show chronicles the ups and downs of a male revue ("Men of the Strip") performing in Las Vegas. "Men of the Strip" will begin its Las Vegas residency after the show airs this summer.
Naturally, Timmons is often shirtless in the show, which is why the former teen heartthrob hits the gym extra-hard, doing a combination of cardio exercise, yoga and weight-lifting.
"I work out about four times a week," he said. "I'll do free weights and P90X. I like doing yoga, and I do high-intensity interval training, too."
Jeff also has to shave his body down for the striptease revue. It's a tough job, he joked, but somebody's got to do it. "Sure, I manscape," he laughed. "I shave my chest. I'm too much of a chicken to wax it! I make sure that everything is neatly trimmed."
Timmons became famous as a member of the super-popular 1990s boy band, 98 Degrees, which featured Justin Jeffre, and brothers Nick and Drew Lachey.
The group’s breakthrough album, 98° and Rising, went platinum four times. The band has sold more than 10 million albums worldwide.

He may have been in 98 Degrees, but the latest news about Jeff Timmons has got us all hot and bothered. If you were a fan of the dude during his days in the hit boy band, you’re going to want to keep your TVs tuned to E! this summer for some sizzling stripper action.
According to People, Jeff will be starring in his own reality show,Men of the Strip, which will follow a male revue — put together after a three-month cross-country search — in Las Vegas through the ups and downs of a 42-city promotional tour.
"It's more than a normal male revue," Jeff tells People. "We chose guys who can sing, who are funny and entertaining. The show will start with a 90-minute movie over Memorial Day weekend, and then we'll start our Vegas residency right after that."
Sound yummy enough? How about if we tell you that Jeff will be taking his shirt off? Yeah, it’s true. But just how did the 40-year-old prepare to ditch his clothes on national TV?
“As I get older, I find it more difficult to stay in shape,” he tells the mag. Jeff credits a low-carb, no sugar (except alcohol) diet with plenty of protein. “I also work out about four times a week,” Jeff continued.
Is that all Jeff did to get stage ready? Absolutely not. “Sure, I manscape,” Jeff says. “I shave my chest; I’m too much of a chicken to wax it! I make sure that everything is neatly trimmed.”
Move over, Magic Mike.

Jeff Timmons Goes Under The Lie Detector Test: Are You Hotter Than Nick Lachey?


98 Degrees and Men of the Strip’s Jeff Timmons dropped by the studio today and talked about upcoming shows in the Tri-state area and warned Ty about giving personal shows… if he were to do one for Corri.

As Ty struggles to find ways to do something special for Corri this weekend (while he attends theBBQ Films event on Nolita), he asks Jeff if he and the gang from Men of the Strip can come over to his place and hold a special performance for Corri and her friends! However, Jeff warns him that it wouldn’t be a great idea since the girls might get wild and loosen up!
On that note, we also put Jeff on the spot with our special lie detector to see if he DOES strip on the show (Unfortunately, for Bryan at least, Jeff was telling the truth!) AND if he thinks he’s hotter than fellow 98 Degrees member, Nick Lachey!
So does he? “Yes!,” said Jeff. But how much hotter? “Way hotter!”

Make sure you get to see Jeff Timmons live in person this weekend in the Tri-state area – from New York to Connecticut!
Tonight he’ll be at Slake in midtown Manhattan performing some of his originals and 98 Degrees classics!
–Intern Allyza, 92.3 NOW


The battle of the boy bands continues!
98 Degrees singer Nick Lachey was asked to pick the worst pop group of the '90s during a Monday appearance on Bravo's Watch What Happens Live. The musician—who appeared sans bandmates Justin Jeffre, Drew Lachey and Jeff Timmons—didn't shade more successful acts like New Kids On The Block, Boys II Men, Backstreet Boys or 'N Sync. Instead, he chose a more obscure British quintet: 5ive.
To be fair, it was host Andy Cohen who first suggested 5ive was the bottom of the barrel. "It's so funny you call them out, said Lachey," who hosts Vh1's Morning Buzz. "That's exactly who I was gonna say."
According to the 40-year-old ""I Do (Cherish You)" singer, "We had a big time beef with those guys."
"We were on the Smash Hits tour in the U.K. with a bunch of pop groups at the time, and 5ive for whatever reason just had it out for us," he said of the 1998 shows. "So we used to battle every night."
Lachey went solo after his band's 2000 album Revelation, but 98 Degrees reunited for 2.0in 2013. 5ive—known for semi-hits like "Slam Dunk (Da Funk)" and "When the Lights Go Out"—released three albums between 1999 and 2001. Five years after the band broke up, in 2006, J Brown, Abz Love, Ritchie Neville and Scott Robinson staged a comeback without fifth band member Sean Conlon. Eight months later, they disbanded a second time. They were featured in the ITV2 documentary series The Big Reunion in early 2013, and they went on a tour of the U.K.—this time, however, Brown was M.I.A.
In late 2013, the "Everybody Get Up" singers embarked on their first solo tour as a four-piece band. Love quite the group in March 2014, effectively making Conlon, Neville and Robinson a pop trio.
98 Degrees, meanwhile, co-headlined a tour with Boyz II Men and NKOTB in the summer of 2013.

SOURCE
By The Strut 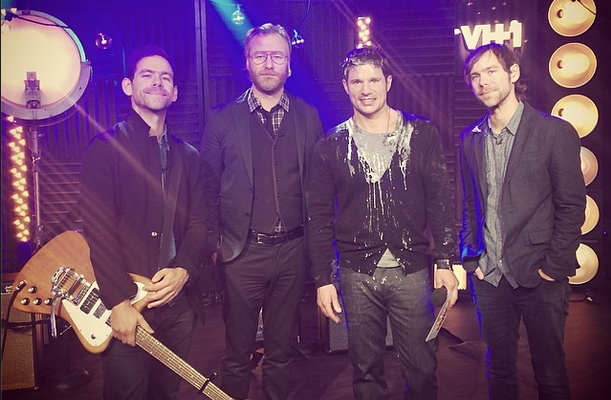 The National have made former 98 Degrees lead singer Nick Lachey the newest member of their band. Oh whew never mind they just appeared on his VH1 show.

Bob Herzog heads to NYC to perform with Nick Lachey

HEAD TO THE SOURCE TO WATCH THIS VIDEO

Updated: Tuesday, March 11 2014, 07:50 AM EDT CINCINNATI (Bob Herzog) -- As you know the last week or so has been a bit of a Lachey lovefest here on Good Morning Cincinnati   Nick, the host of VH1's Big Morning Buzz Live, talked about a Dance Party Friday.  We talked about him talking about that.  He said he wanted to hear me do a 98 Degrees song.  We parodied "I Do (Cherish You)". We even got Drew to make a cameo. "I'm a little shocked that he didn't accept the help from Drew.  Drew was there. Drew made the drive all the way out to the gravel pit for the big video shoot. What's even worse--did he know who Drew was? He's probably like who's this random guy.  Well, if he doesn't know who Drew is, then this whole 98 Degrees experiment is over. Bob, it's not happening."   I promise we knew that was Drew.  We didn't just randomly follow him to a construction site and sneak up on him with a camera... as far as you know.  Anyway, the coup de gras in this back and forth really came yesterday when this happened. "You have to admit, they look amazing. I don't know about Bob, but the guy on the left, that's all you. 12 degrees. So Bob, look, this is how it goes now. Very flattering, the video was fantastic, but in order to see this thing one step further I've got to see how we perform together, how we sound together, so if you can make it to New York, Bob we can see what happens."   If I can make it to New York, well, it turns out I can.  I'm heading to the Big Apple today.  I'll be checking in from there with you guys here on Good Morning Cincinnati Wednesday and then somewhere between 10 and 11am on VH1 I will join Nick on Big Morning Buzz Live.      Follow Bob Herzog on Twitter @bob_herzog
\