This is older footage. But it was just uploaded at youtube & the footage is pretty darn good!! Enjoy!

The School for Creative and Performing Arts (SCPA), Lachey’s alma mater, will share $75,000 of the contribution with the VH1 Save the Music Foundation.

SCPA will use the funds to support the school’s renowned artistic programs, including drama, dance, creative writing, music, visual arts, and technical theater.

It's finally been found. The old Subermarine commercial that Jeff did years ago.

Source
follow the above source for the pics that i could not post here!! There are some super cute ones!!
SOURCE

THIS HAS GOT TO BE MY FAVORITE PIC!!!! 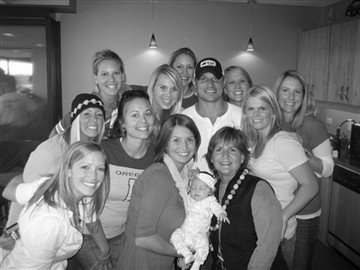 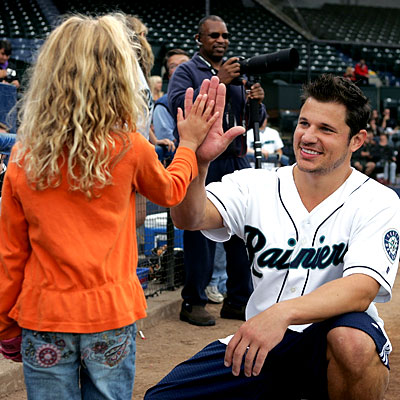 These pics are from last years game. If I find some from this year I'll have them up right away!

SOURCE Beans. The Vegetable with More

Source
We've been speculating for a bit whether Nick Lachey and Vanessa Minnillo are as on as they say they are, but all seemed to be OK this weekend when we chatted with 'Ness at the Pink Party. I'm sure you'll sleep much better tonight knowing this information.

Now, when we first ran into V at the charity soiree, she was a bit hesitant to chat. "You guys don't like me very much," she cautiously stated. Who, moi? That's not the case doll, I'm just a little indifferent toward ya. And since you were quite sweet and chatted with us, regardless, you're so moving up in the A.T. book, darling.

Oh, and earlier in the day, Nick-babe was spotted sporting his Trojan colors as he tailgated and got pumped for USC to take on Ohio State in their first home game. He was looking yummy in a manly man kind of way as he cheered inside for his fave team with his boys. This has nothing to do with anything, really, other than a nice visual of the totally doable shorty, we admit.

But when we told V that Nick's beloved Trojans killed it on the football field, she looked pleased and piped, laughing, "So I'll get some good voicemails; he'll be happy." So you and Nick are all good then? "Absolutely...he just had his event in New York for Feeding America...I'm so proud of him. He's taking time now to play today and support his Trojans, and now I have my night of this."

Ms. M, as if you cared, was accompanied by her friend Corinne, who is on the upcoming season of Survivor. This fundraiser for women's cancer research hit home for V.M. because her gal pal found a lump in one of her breasts when she went through a routine checkup. "Nobody is invisible to it...They're our moms, grandmothers, sisters, friends...that's why it's so important." You sure got that right, sister.

source
LOS ANGELES - An electric night of skating and music performances will culminate under the lights of the Galen Center on the University of Southern California campus in Los Angeles. This one-time only event is in celebration of the performers' families, as the featured artists give a heartfelt dedication to their loved ones for the care and devotion that shaped their lives and athletic careers. This live show takes place on Friday, Oct, 3, 2008, and will be nationally televised Nov. 16, 2008, on NBC, shortly before World Children's Day® at McDonald's, an annual global fundraiser for Ronald McDonald House Charities® (RMHC) and other children's causes.

Lachey's super-stardom as pop singer and TV personality began as the writer and front-man of the boy band 98 Degrees, selling 10 million albums worldwide and charting several top-40 hits. His solo album "What's Left of Me" was certified gold and topped the Billboard 200 charts at No. 2. His on-screen endeavors include the TV series Newlyweds: Nick and Jessica, with then wife, pop star Jessica Simpson, as well as directing the Cincinnati Choir that won the NBC reality competition Clash of the Choirs. He currently hosts the ABC reality show, High School Musical.

Lachey will lend the power and grace of his voice as these top figure skaters perform their routines with athletic prowess and skillful mastery. Included in this musical line-up are special guests Almost Amy, consisting of two professional dancers from the hit TV series, Dancing with the Stars -- Mark Ballas and Derek Hough. Ballas won the 2008 show with partner Kristi Yamaguchi.

These are not my pictures. Nor do I know these girls. I found them randomly while I was browsing flickr and of course there of Nick So I am sharing!! :) Wish I could have been there!! I always forget that he's good friends with Jimmie....