Article about Nick & Vanessa on the Red Carpet

Therefore, you can imagine the joy in seeing those two lovebirds, every bit the supportive couple of each other. There was Lachey pointing out his better half's fashion sense while she stepped back and let him have his moment with the Make A Wish children who looked overjoyed at the former 98 Degrees singer's smile..And those eyes are so blue!

As they walked into the theater, Milano whispered to Lachey, "you are so adorable!" Indeed. 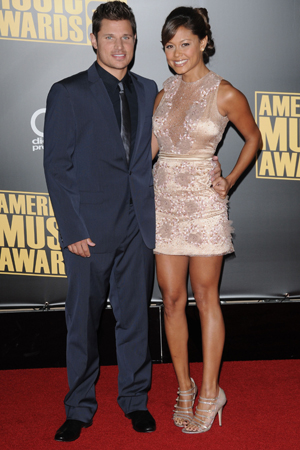 This is the ensemble that she should have worn on the red carpet, as it more fitting to her image, but it looks so scary.

You wouldn't want to get too close, as you could hurt yourself on one of those spikes.

Nick & Vanessa after the AMA's

It was a massive night in Los Angeles as the American Music Awards took over the Nokia Theater. And afterwards Nick Lachey and Vanessa Minnillo were spotted heading off to a swanky afterparty.

The “What’s Left of Me” stud and his former MTV veejay girlfriend looked very much in love as they arrived at the Chateau Marmont, walking arm-in-arm.

Vanessa will be the head judge of the contestants’ inner beauty along with Cheryl Tiegs and former “Top Model” judge Nole Martin. Each episode will feature the judges monitoring the contestants, critiquing their behaviors, and eliminating one of them by the end of the night. The winner will get a spot in People magazine’s 2009 issue of 100 Most Beautiful People.

Backstage & Onstage at the Ama's Nick & Vanessa at the AMA's

Celebs walk the walk for Charity

On Sunday, May 4, 2008, Hollywire attended “Jenny’s Walk,” a 5K walk held at San Diego State University in memory of former student Jenny Poliakoff. The walkathon, MC’d by Johnny V of VH1’s Scott Baio is 46… and Pregnant and VJ Michael Benz, raised more than $104,000 for The Friendship Circle, an organization dedicated to helping special needs children and their families of which Jenny was a founding volunteer.
The also event had support from celebrities, including singer Jeff Timmons of 98 Degrees, actress Jillian Murray, to star in David Zucker’s An American Carol, actor Michael Copon, to star in the prequel to Scorpion King, singer (and former beauty on The Bachelor) Ashlee Willis, actor and producer Paul Alessi, producer Jeff Kalligheri, and - last, but certainly not least - Emmy Award winner Carlos Ramirez (a.k.a. twin brother of Efrin ‘Pedro’ Ramirez in Napoleon Dynamite).

Participants walked a path through SDSU’s campus and once they crossed the finish line, enjoyed a fun-filled day of barbecue, a carnival full of face painting, games and sports activities for children and adults, an award ceremony to recognize extraordinary kids and volunteers, and, likely the most memorable part of the day for the many swooning females, a musical performance by Jeff Timmons.

I’m so blessed to be where I am and have what I have. This is the least I can do for the community and for the people who need it most,” said Jeff, an avid supporter of children’s charities. “Being a dad myself, I feel very strong about caring for kids, helping them live healthy lives and have bright futures.”

HW: What ever happened to Deborah Gibson, Jeff?

JT: (Laughs) That was a completely fabricated rumor that started after she and I attended a charity event. It wasn’t even like we went together. The most we did together was take a photo. She’s a great person, but we’ve never been anything.

HW: So, what about Jillian? You and her seem to be very close. Nice catch, she’s HOT!

JT: (Breaks out in laughter again) Yes, she is beautiful.

JT: (Grins) You’re killing me here! No, she I are a good friends.

Yeah, we’ve never heard that one before. Hmmm… with the way things are going in Hollywood, maybe we should add Jillian to our Baby Bump Patrol list… just in case.

P.S. How adorable are they??


Follow the link. If I figure out how I will embed the commercial at a later date. Its so cute!!

Sasha Cohen skating to Nick Lachey's "What's Left of Me*

More Pics can be found HERE