Vanessa Lachey on Her Newborn's Name, Nick's Sweet Tooth & Why You Should #BakeSomeGood 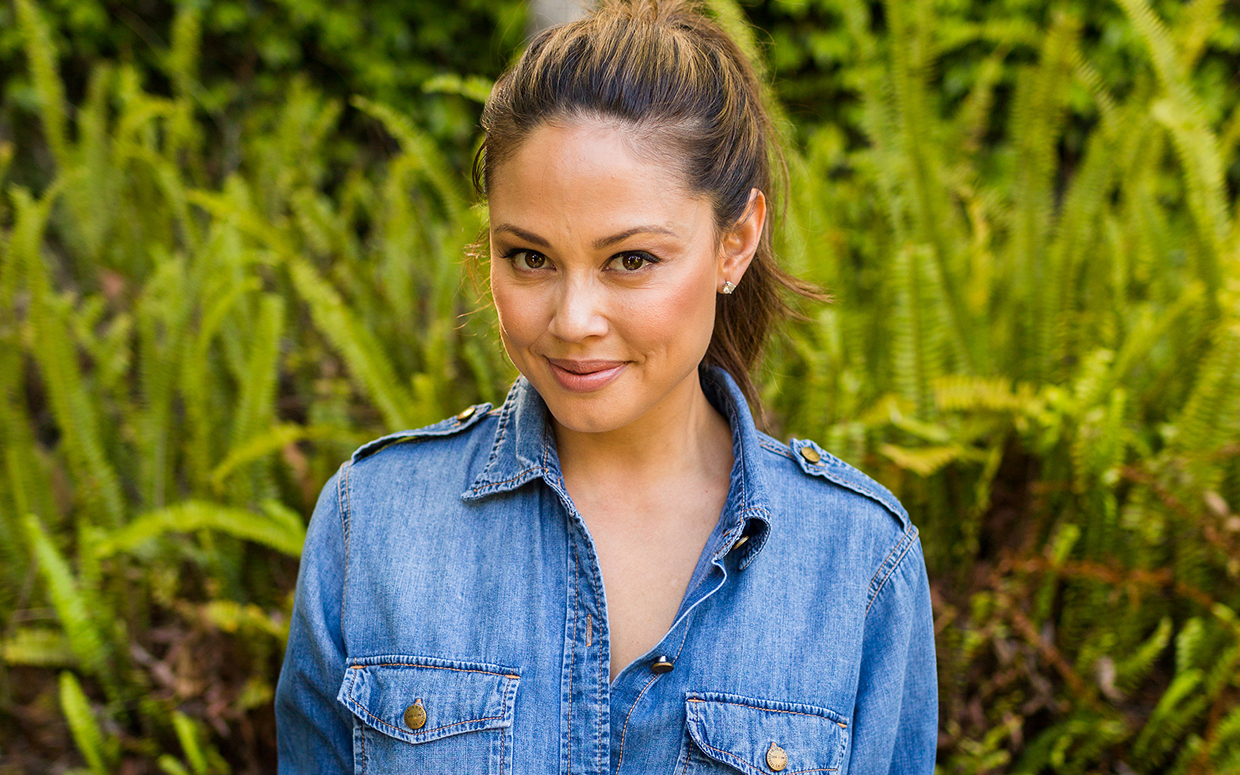 Vanessa and Nick Lachey are living the sweet life. Having met on the set of Nick’s music video for “What’s Left of Me” in 2006, they began dating until their intimate, surprise wedding on a tropical island in 2011. Vanessa, known for hosting shows TRL and Entertainment Tonight, and Nick, member of pop/R&B boy band 98 Degrees, even share the same birthday of November 9. The couple welcomed their third child, son Phoenix Robert Lachey, on Christmas Eve, and their middle child, daughter Brooklyn Elisabeth Lachey, turned 2 on January 5.
Her social media is flooded with photos of her three adorable kiddos (including 4-year-old Camden John Lachey), showing how much she enjoys motherhood.
Nick and Vanessa Lachey at the 2015 Entertainment Weekly Pre-Emmy Party. (Alberto E. Rodriguez/Getty)
In addition to being a loving mom, she isn’t shy about acknowledging her husband’s good looks, either. Vanessa mentions the phoenix tattooed across Nick’s shoulders — which played a part in deciding their newborn’s name — and wonders if I know of it, quickly adding, “I’m sure you do because you’ve seen 98 Degrees pictures with his shirt off.”
The busy mama recently teamed up with Nestlé Toll House for the #BakeSomeGood campaign, an effort to inspire people to brighten someone’s day and celebrate the good in the world. Over the holiday season, Nestlé selected six bakers in Chicago, ranging from amateurs to professional chefs. Each day, for 100 days, they baked and delivered treats as a pick-me-up or thank you to others in the community.
Together they made 20,878 baked goods and spent 853 hours in the kitchen to perform the random acts of kindness. On the 100th day of the campaign, the bakers worked for 25 hours straight, setting the Guinness World Record for most consecutive hours of baking.

An avid cook and baker, Vanessa created her own recipe to contribute, a decadent Chocolate Chunk Cookie with sea salt. She spoke with Parade about balancing family and romance, Nick’s sweet tooth and how to give back with baked goods.
Congrats on welcoming baby Phoenix! How did you choose his name?
It’s so silly how it came about. Nick had just come off of Kelly Ripa’s show and I was looking at her Instagram and thinking of her son Joaquin. I was like, Joaquin, that’s a beautiful name. Joaquin Phoenix. Phoenix. At that moment that I said that, Nick had walked by. He has a phoenix rising from the ashes on the back of his shoulders and it’s beautiful, symbolically, what it stands for; we’ve had so many conversations about it. With our other two we went back and forth for months and months. With this one it was the only name that we thought of. It was the only one we talked about and we just felt it right from the beginning.
What do you enjoy most about being a mom?
My favorite part is when they do things unsolicited… when Brooklyn comes out and she’s like, “Aw, mommy, you look so cute!” Then she hugs me so tight that she’s clenching her teeth. Or when Camden leans over and grabs my hand and goes, “I love you, Mama.” I just melt because I didn’t tell him to say that and I didn’t make him say that and I didn’t give him a present that made him say that. He just felt it in his heart and wanted to say it. For me and Nick, it’s seeing these things happen with these little people who one day are going to be young adults, and we hope that we instill in them good qualities. When you see bits and pieces of those good qualities it makes you feel good.
How do you balance work, family time and one-on-one time as a couple?
We constantly have to communicate and now with three, we have to visually communicate; we started a family board where we put everything so that we not only talk about everything going on, but we see everything going on. Then it’s about, when you’re with the family, making that family time. I understand that, 24/7, people can’t put away their devices, but it is important to try at times. Whether it’s meal time or it’s morning milk and cartoon time, just put your phone away.
As far as the relationship, to be honest, you have to force the time and then once you’re there it’s not forced. We force it by saying OK, next Friday we have to get a sitter, we have to make time, we’re going to go away or go out to dinner. With three kids there’s no spontaneous, “Do you wanna go grab a drink?” That’s impossible. You kind of have to think ahead and we really try to do that as often as we can.
What made you want to get involved with the Nestlé Toll House #BakeSomeGood campaign?
As a mother, all I try to do a lot in the day is teach my kids about the good in life and how they can be good people but also, how to give back and be selfless. This was an amazing opportunity because I love baking and it was the perfect time; I was pregnant and they approached me. I was absolutely excited about it because, who doesn’t want to be a positive influence, not only to their kids but to their community? [By] the simple act of giving some chocolate chip cookies to your neighbor, you can have a ripple effect of something bigger and more beautiful. I think in this time we all need to focus on positivity. We need to focus on being selfless. This is an easy, very tangible way of doing that and hopefully it sparks other ideas for people to do different things in their community.
Lachey with her Chocolate Chunk Cookies.  (Stephanie Todaro Photography)
Did Nick make special baking requests?
He loves anything pumpkin. This campaign began in the fall/winter, so I did some pumpkin cookies and pumpkin muffins, but selfishly I made salted chocolate chip cookies because I was pregnant and wanted something salty and sweet. It was the perfect combo.
Your Chocolate Chunk Cookies are like an upgrade of classic chocolate chip. What other Nestlé flavors should we try?
They have refrigerated cookie doughs that are easy and literally take minutes to have your kids break off the pieces, put them in [the oven]. They’ve got a strawberry shortcake and blueberry lemon one right now. When I told [Nick] that they had a strawberry shortcake one he was absolutely bonkers. The guy does not discriminate and I love it. It makes it more fun for me to cook and to bake and to experiment because he eats everything.
The refrigerated dough must come in handy. Baking with three little ones in the kitchen sounds messy.
If I’m baking with them, I have to know it is what it is. I have to let go of my OCD and let them have the beautiful moment. If I want to do a good dinner for Nick or bake something specific, I wait until Camden and Brooklyn are asleep. But it’s fun for them to be a part of it because those are the memories you have growing up. That’s what you think of, those smells and those moments. That’s what I’m excited for them to have.